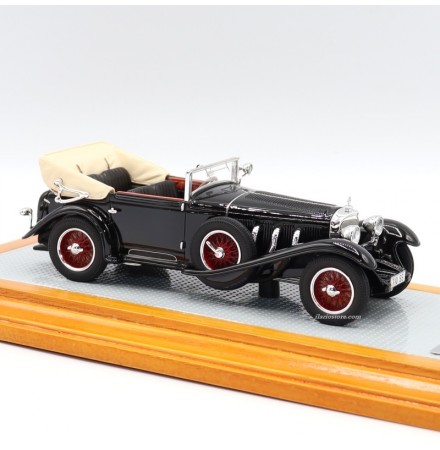 Limited serie of 45 pieces only

History:
The 1929 Mercedes-Benz 710 SS (W06), Cabriolet C, 26/160/200 PS, Sindelfingen, was ordered on October 29th,1929 by the Rudolf Caracciola & Co. in Berlin on behalf of Mercedes-Benz New-York.
It was delivered to the Rudolf Caracciola dealership in Berlin on November 26th, and shipped onwards to New-York, where it arrived at the Mercedes-Benz New-York dealership right on time for Christmas on December 23rd, 1929.
On March 10th , 1930, the 710SS, which cost the paltry sum of 44,000.00 (*) Reichsmark (at the time the most expensive car in the Mercedes-Benz line-up, bar none) was registered as being owned by a Mrs. Elinor Stewart Ayres.
She kept the car until it became the property of a Mr. Eddie Sturgess in 1933, who kept the 710SS Cabriolet until 1939.
The next owner, Paul Ceresole, a wellknown Massachusetts sports car racer in the 1940s and 1950s, kept the car for 54 years, until 1993, when the new owner became one Morgan Warren.
One year later, in 1994, the car returns to Germany, this time the owner is Mr. Peterheinz Kern, a wellknown Mercedes specialist and collector. It was decided not to restore the car, which for its age and relatively small number of owners, is in excellent shape, and to leave the car in totally authentic condition, with its acquired patina intact.
The charm of years past so to speak.

In 2000, ownership goes from Peterheinz Kern to his son Markus Kern, who in 2013 takes part in the St.-James Concours d’ Elégance in London (UK).
Shortly after the Concours, the 710 SS changes hands and becomes the property of the present owner.
It is not clear if the new owner will retain the 93 year old car in its remarquable original condition, or if he decides to restore it at some point. Future will tell.
For now, the Cabriolet C – of which there are only three left worldwide, and two of which have now been miniaturized by Ilario as well as described in the ‘Newsletter’– is in good hands!
(*) 44,000.00 Reichsmark of 1929 are equal to 174,680 € or 201,781.00 USD of 2019. The average pre-income tax salary in Germany in 1929 (prior to the Great Depression) was 2,110 Reichsmark per year, or 8,377 €. In other words, the 710SS Cabriolet C cost the equivalent of nearly 21 years of the average 1929 pre-Depression salary.
Thanks to Mr Bernd Loosen for retracing the history of this car and writing this text.
You can subscribe to the news newsletter dedicated to Mercedes-Benz miniatures by Mr Loosen by writing to him at bdloosen@gmail.com