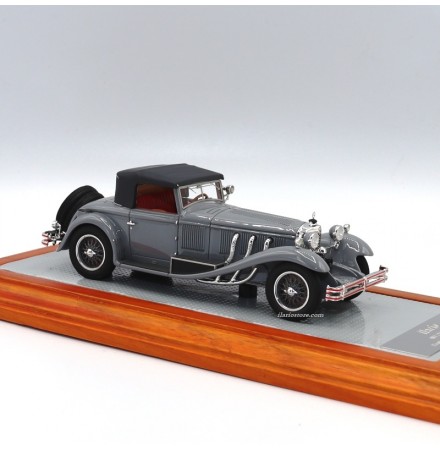 Limited serie of 30 pieces only

… with body by the Italian coachmaker Castagna was made for Samuel Lionel Rothafel (1882-1936). Rothafel was an American film operator and innovator in stage presentations, better known as "Roxy". He began his career in 1905, showing films in the back room of a saloon in Pennsylvania, with the local mortician renting him - except on days of large funerals - the 250 chairs the room could hold. As movies and talkies became increasingly more popular, he opened a succession of larger and larger theaters.

In 1927, he opened the "ROXY" in New York, hailed as "the largest theater since the fall of Rome". This cinema could hold 10,000 spectators, it also had 6 box offices, a hospital (!) and a waiting room big enough to accommodate 2,000 people.

Roxy Rothafel, who in 1932 was the founder of the dance troupe known worldwide to this day as the "Rockettes", was also the first to inaugurate the projection of large screen films on the giant screen of his "Roxy" cinema on Valentine's Day 1929.

In the summer of the same year 1929, he ordered his famous Mercedes-Benz 710 SS convertible-roadster, and had the chassis delivered to the coachbuilder Castagna in Milan, to receive a custom body.

Upon delivery of his two-seat convertible, black with chrome stripes, Roxy was dissatisfied with the appearance of the body, and sent the car back to Castagna in Milan for modifications: the vertical windshield was replaced by a split windshield, with a 15-degree rearward tilt.
He also had the soft-top tensioners removed. The revised hood had a cleaner profile when folded, with the side windows disappearing into the doors under discreet chrome strips with piano hinges, turning the convertible into a roadster. These changes made the car's hood look even longer; one might say even more elegant.

Roxy Rothafel kept this car until his death at the age of 53 in 1936, and the car disappeared, only to reappear 16 years later in 1952, owned by a Henry G. Carpenter of Spring Lake, Michigan.
At that time, the car is either white or cream colored, with a polished aluminum hood. The spare wheels are no longer on the rear hood, but on the car’s sides.
In 1972 the Mercedes-Benz Club of America membership register names the owner of this 710SS as a Gene Rouse of Fort Collins, Colorado. The car is now yellow with a black stripe along the beltline.

In 1986 we find the car at "Coys of Kensington" in London, looking for a buyer
In 1989, or in the very early 1990's, collector Peter Steenbuck acquired the Cabriolet, without its engine. The car is now yellow on top with black sides.
It was not until 1999 that all the parts needed for the restoration, including a 1929 Mercedes SStype engine, were found, and brought together.

In the meantime, the yellow part of the car was repainted grey, the sides remained black, and the side strip became red. The restoration was carried out by the restorer Jürgen Swoboda in Steinbergkirche, a town near the Baltic Sea and the Danish border.

In 2013, the car is exhibited at the booth of the classic car seller "Carruca".

At the annual Techno Classica exhibition in Essen, Germany. The car is now repainted in grey.

We find it again in 2016, still in grey, and once again exhibited at the stand of "Carruca", at the annual "Classic Expo Salzburg" - event in Austria.
Thanks to Mr Bernd Loosen for retracing the history of this car and writing this text.
You can subscribe to the news newsletter dedicated to Mercedes-Benz miniatures by Mr Loosen by writing to him at bdloosen@gmail.com