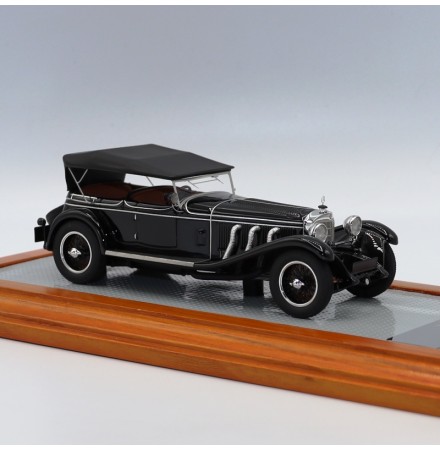 Limited serie of 35 pieces only

Thanks to Mr Bernd Loosen for retracing the history of this car and writing this text.
You can subscribe to the news newsletter dedicated to Mercedes-Benz miniatures by Mr Loosen by writing to him at bdloosen@gmail.com

I dare not say anymore what a fantastic car this is, simply because this would be an injustice towards all the other Kompressor cars. Each one is a marvel in its own right.

Ilario seems to think so too, for this is now another one in the series of various Mercedes-Benz type S, SS and SSK models he has produced, and speaking about marvels, his new release in 1:43 scale is a marvel too, for around 300 €. Sure, Ilario’s models are not exactly inexpensive, but then neither was a brand-new Type SS back in 1931: it is worth noting, that the Mercedes SS in the Cabriolet version was more expensive (Cabriolet C: 45,0000 RM in 1932) than the Mercedes 770 (W07) “Grosse Mercedes” (Cabriolet C: 41,500 RM in 1932)!

And don’t get me started about out how many years an average-earner in Germany would have had to work to afford such a car. Perhaps his grandson might finally have been able to call it all his own.

First and foremost, I’d like to thank Mr. Markus Kern for the incredible number of rare contemporary documents, and an incredible trove of photographs, which he provided me with for this article.

Tuesday October 23rd, 1928: on this date, the Sport/4 chassis with the commission number 41329 is sent from Stuttgart-Untertürkheim to “Carrossiers Georges Gangloff in Geneva” for its coachwork.

On December 12th, the Stuttgart factory wires to the Gangloff coachworks 7,100 Swiss Francs i.e. 5722.60 Reichsmark, in payment for the bodywork.

On January 25th, 1929, Gangloff sends the finished 680 Type S, now with the Gangloff body Nr. 2611, back to Stuttgart. The car is painted in red and black, - a typical Gangloff colour scheme - whereby I suspect that it is the fenders, as well as a decorative stripe (for want of a better definition) around the car which are black.

Next, the car is being prepared for display at the Copenhagen Automobile Exhibition (February 22nd to March 3rd, 1929), and shipped to Nordisk Motors, Copenhagen, in consignment. It is interesting to note that car exhibitions at the time were less of a show place for the automobile brands, but mainly car dealer shows, where new cars could not only be admired and inspected, but where cars were often purchased on the spot, presumably for delivery at the end of the respective shows.

During the Copenhagen Exhibition, two members of the Royal Danish family, crown prince Friedrich of Denmark, and Prince Axel of Denmark, came by to visit among others the Mercedes-Benz stand, and examined the 680 Type S.

Prince Axel in particular, President of the Royal Danish Automobile Club, seemed to take a keen and close interest in the 680 S.

On April 25th, the car returns to Untertürkheim.

Four days later, on Monday April 29th , 1929, Mercedes-Benz Automobile AG Zurich orders for a Hermann Schreiber in Grenchen (Canton Solothurn, Switzerland) the 680S Tourer with Gangloff body, and on May 31st, the 680, Type S dual cowl tourer, with chassis Nr. 35979, is delivered to Mercedes Benz Zurich for its new - and first - owner Hermann Schreiber. It would seem that the car was then sold in 1934 to a Gustav Bader from Olten (Canton Solothurn) and received the Solothurn licence number SO 2533.

What happened to the car in the following years could not be retraced, however, on August 15th,1947, the car was photographed parked on a street in Zurich. On the available picture, and aside from an obviously different licence plate number, alterations are visible at the front-end, notably the bumpers, but also the wheel covers, the headlights and the horns.

Next, the car resurfaces in 1958, when a Hansjoerg Blendel of Zurich purchases the car, for “a little under US$ 2500”… what follows then is a correspondence between Mr. Blendel and the Mercedes Museum-Archiv in Stuttgart. In a letter dated July 24th, 1958, Mr. Blendel requests some information regarding the original back-end looks of the car: "The rear of the car was "modernized" at an undeterminable time - up to and including the doors, the body is obviously original. I would now very much like to restore the rear to its original condition, and would be very grateful if you... could provide me with suitable documentation regarding the body’s rear.

The circumstances under which a potential buyer in the USA learns about the existence and availability of the car are not clearly known, however, in November 1959, the Adam Opel AG in Rüsselsheim (Germany), at that time still a subsidiary of General Motors, sends one of its Zurich based employees, Manfred Prigge, to inspect and appraise the car on behalf of Harry Charles Dumville, a Director of Engineering at GM in Detroit. The very detailed report of that visit to Mr. Bendel’s garage, dated November 27th reads like this: “Mr.Bendel bought the car about a year ago from someone who inherited it, who did not know how to drive (quoting Mr. Bendel, who was not willing to supply either name of address of the person he had bought the car from). The body of the car is genuine up to the back of the front seats. The complete rear end of the car was replaced by the former owner by some “more modern” design… Upholstery is practically non-existent…the windshield is missing from the car…”.At the time of Mr Prigge’s report to his superior at Adam Opel AG, the 680S is described as being a light marine grey, with thin fire engine-red stripes.

Despite the fact that Mr. Bendel refused to give the names and addresses of previous owners of the car, and despite his what could be described as rather placatory answers given to questions about the condition of the car, Mr. Dumville submits to Mr. Bendel a purchase contract in the agreed upon amount of 10,760 Swiss Francsor US$ 2,500. The purchase is finalized on February 4th 1960.

Finally, Mr. Bendel accepts to sign on April 1st, 1960 at the Vice Consulate of the United States in Zurich a declaration under oath of his full legal ownerhip of the Mercedes 680S, chassis Nr. 35979, until he sold the car to Mr. Dumville.

The car is then shipped to Detroit, where Mr. Dumville has the back end modified to a 680S twoseater replica. The car is repainted cream, and now bears the Michigan Historical Motor Vehicle license plate 35X64.

A well known german collector and restorer of antique cars, Markus Kern, buys the 680S from Georgia D. Valentine. It is agreed that the purchase price will go to a Trust Fund for the education of Mrs. Valentine’s offspring.

The 680S dual cowl tourer I shipped to Germany; then, from 2009 to 2011, the Rod Jolley Coachbuilding Ltd. of Lymington, Hampshire, Great-Britain, reconstructs the original body Nr. 2611.

Roughly a decade after having bought the car in the USA, on June 12th 2018, Mr. Kern sells his partially restored 680 Type S with coachwork by Gangloff to Mr. Robert Kudela, a collector from Kroměříž, a town in the Zlín region of the Czech Republic.

In 2019 and 2020, MTK Fahrzeugtechnik GmbH, near Coblenz, restores the entire chassis of the car, then the car is shipped to Kroměříž, where Robert Kudela completes the restoration, encompassing the interior, the upholstery work, the finish of the body and the painting, and the final assembly.

Addendum: an identical tourer body by Gangloff on a Mercedes-Benz 680 S chassis was "unanimously declared the most beautiful exhibit" (quote) during the 1928 International Swiss Motor Show in Geneva.

The only clear difference between the above described Mercedes 680 S with chassis 35979, and this 680S Tourer exhibited in Geneva (chassis no. 35341) was that the exhibited car’s windshield was not continuous, but split and hinged.

With this 1:43 model of the 1928 Mercedes-Benz 680 Typ S, chassis 35979, Ilario has once more given the collectors of Mercedes miniatures a model they can be proud of to display. A perfect miniaturization of the actual car, it is available from Ilario at https://ilariostore.com